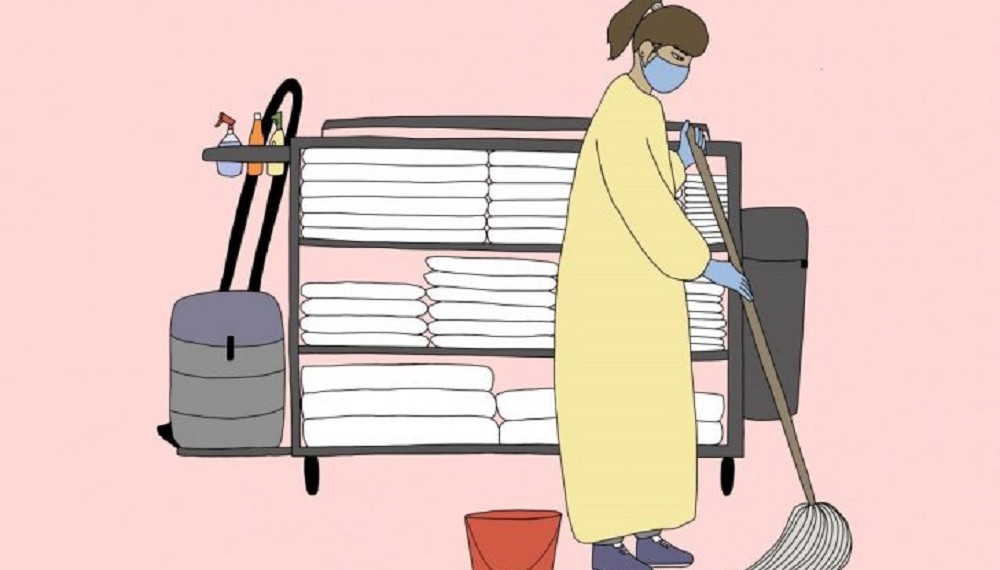 ‘Thanks from Iso’ – Ruby Jones and MIQ Art Exhibition

The stories of Kiwi returnees, frontline workers, and MIQ staff are being told through the exhibition, Thanks from Iso.

Since March 2020, over 130,000 returnees have spent a mandatory fortnight in managed isolation facilities around the country. Along the way, they have been cared for by thousands of their fellow Kiwis.

Now, this exhibition offers those who have never experienced quarantine – either as a returnee, or a worker—an insight into this world, through art and letters created by returnees.

Located within the Rotorua Lakes Council Galleria, two floor to ceiling “scrolls of gratitude” display some of the thousands of thank-you letters and emails from returnees to front line workers.

Also on display is a dress made by nine-year-old Teau Manea Miriama Singer, created out of the brown paper meal bags she received during her stay in quarantine.

These meal bags represent how returnees processed the experience of quarantine, by using mealtimes to create structure during their stay, keep their spirits up, and endure being separated from their home and loved ones.

The exhibition also includes 14 prints from globally renowned Kiwi artist, Ruby Jones, created every day of her fortnight residency at an Auckland Art Gallery – the same period returnees must spend in managed isolation.

Commissioned by Accor, Ruby said she wanted to showcase the “real human moments” of life in isolation. During the fortnight, she interviewed over 28 Kiwis staying, working, or with a loved one in managed isolation, of different ages, genders, jobs, and experiences.
“I took notes from what each person shared with me and that formed the basis for the following day’s illustration,” she said. “Some of the drawings were fully focused on one person’s story – like the baby who took their first steps in MIQ and how the MIQ staff were so excited to share that milestone with the family.”

“I shared tears and laughter, fears and loss, and journeys that were bigger than the hours spent sitting on the plane or in the hotel. It was easily one of the most special and moving projects I have ever been a part of.”

The Wellington artist hoped her prints would provide an insight into the work done by the thousands of Kiwis who “almost form a human shield for the rest of us”.
“Flight staff, ground crew, bus drivers, cleaners, medical staff, the military, the hotel staff – and those people all have families who support them, worry about them. It is a huge human shield and it feels so important that we not take them for granted.

“I hoped that these drawings might just help the rest of us to pause and take time to really feel grateful for that, to see the people who are that shield for the rest of us.”
Most Kiwis outside of this environment didn’t know what went in to keeping the rest of the New Zealand population safe.

“I think it was really important to open the door and let the rest of the country think about how things might be inside MIQ, to understand and appreciate the efforts going into our whole COVID response. All the rest of us are just able to get on with our days – mostly – some scares, yes, but we have been so well taken care of.”

Ruby has captured the shared feelings and experiences of New Zealanders before, with an illustration she created after the 15 March Mosque Attacks reaching a global audience.
Though created or inspired by individuals, together, the works of the Thanks From Iso exhibition are a testament to the bravery, solidarity, and compassion shown by Kiwis during the COVID-19 pandemic.

Who is Ruby Jones?
Ruby is a Wellington-based illustrator who works primarily in digital form. She is best known for her drawing of two women embracing in a hug with the words ‘this is your home and you should have been safe here’ which was spread widely following the 2019 Christchurch terror attacks. Since then she has illustrated a cover for Time Magazine and released her first book All Of This Is For You through Penguin Random House.