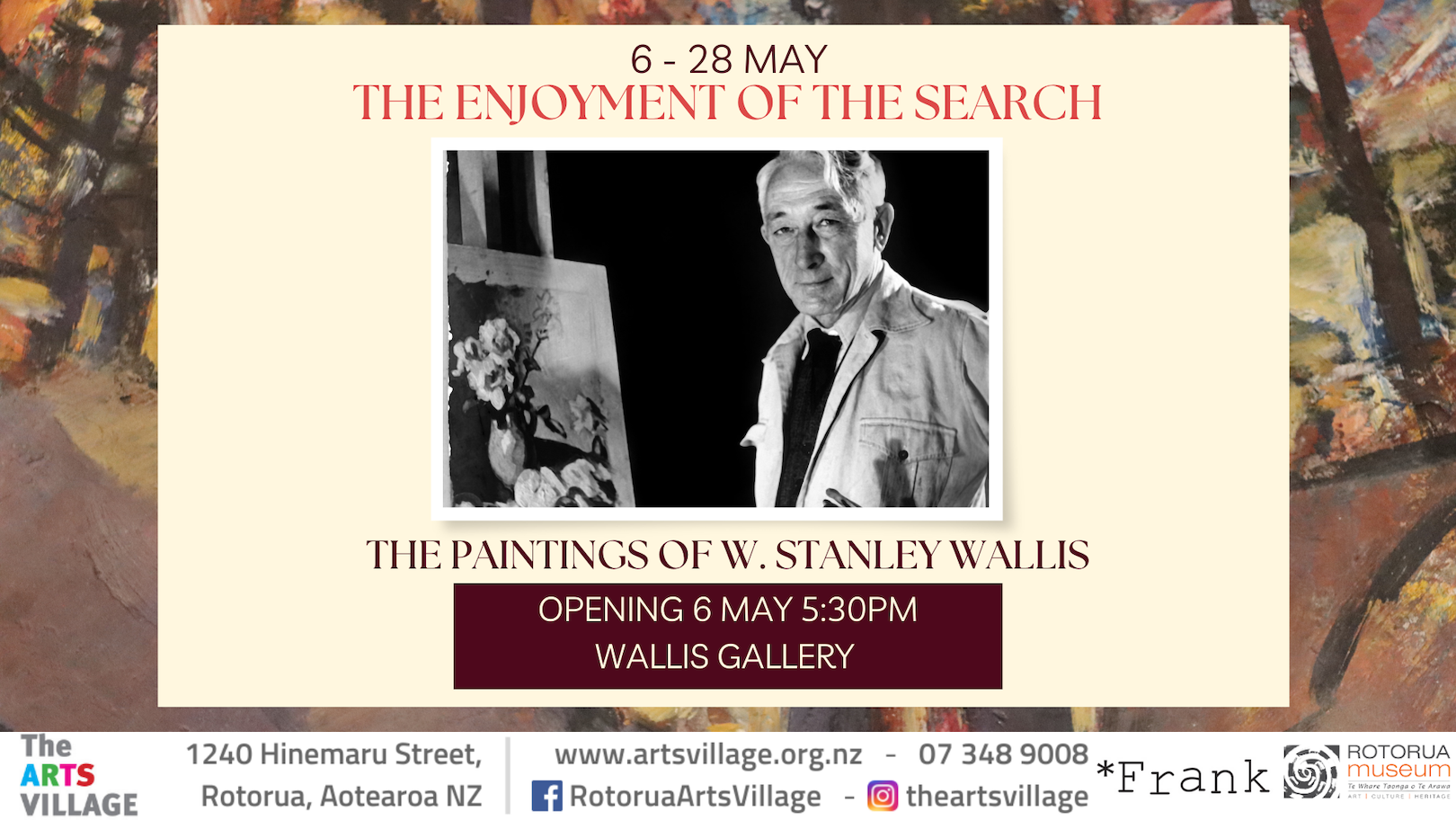 The Enjoyment of the Search: Paintings by W. Stanley Wallis

In association with Rotorua Museum and the Fraser family, we are pleased to announce an exhibition of W. Stanley Wallis’ paintings, 1891 – 1957. Wallis was an artist, doctor and major community figure in Rotorua. Though he did not take up art until later in life, what started as a hobby soon became an absorbing passion.

The Enjoyment of the Search opens on the 6 May at 5:30pm, when Studio One will also be renamed in his honour.

Wallis painted largely for his own pleasure but realised the importance to the community of exhibiting regularly. He had a strong sense of loyalty that encompassed his both fellow artists, to whom he was regarded as an astute and constructive critic, never demeaning and also the wider community from which he drew inspiration. He first exhibited with the Auckland Society of Arts in 1942 and was a regular exhibitor, alongside exhibiting with the Thornhill group, the Rutland group and local exhibitions in Rotorua, Tauranga and Hamilton for the remaining 15 years of his life.

Wallis left relatively few completed works and even fewer signed – in part because of his early death, and in part because he didn’t rate his work despite positive comments from contemporary critics. He was on his own journey, his own enjoyment of the search.
Wallis’ primary vocation was a doctor, and he began his career in medicine in 1913, assisting vaccinations in the smallpox epidemic. His work with the large Māori community affected by smallpox lead Guide Rangi to dub him the ‘White Tohunga’ and his memory was commemorated in a hour long poroporoaki from Kēpa Ehau, the renowned Te Arawa orator, at his funeral.

When WWII hit our shores, he donned his uniform to run the new convalescent hospital in Rotorua for wounded soldiers. Named by Maori ‘Te Whare Aroha – the Place of Kindness’ this hospital treated the men in a holistic way, dealing with their emotional needs and well as medical, preparing them for civilian life. The Rotorua Post in its obituary noted “Men who entered it, broken and dispirited, left it fully equipped to face the world and the spirit that animated them was enlivened by the great skill, patience and above all, the understanding of Dr Wallis.” After the war the hospital was renamed the Queen Elizabeth Hospital and specialised in rheumatic disease and cerebral palsy. He continued as Medical Superintendent until his retirement in 1957. He died later that year.